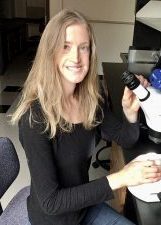 Molecular and cellular neurobiology in health and in aging

Neurons live as long as the animal in which they reside. For humans, this means that our neurons can live for 100 years or more. Over the decades of our lives, we show signs of aging – our skin becomes wrinkled, our hair turns gray. Our neurons likewise show signs of aging, features of which include decreased morphological abnormalities, synapse loss, glucose hypometabolism, and mitochondrial dysfunction. This is problematic for health: first, aging is often accompanied by cognitive decline, and second, aging is by far the primary risk factor for dementia and neurodegenerative disease. The Richardson Lab use the nematode Caenorhabditis elegans to ask, what causes neuronal aging, and can it be prevented?

C. elegans has evolved the remarkable ability to de-couple the symptoms of aging from chronological age. Normally, C. elegans age and die in two weeks. However, in the alternate organismal state called “dauer,” animals pause all growth and development programs and survive for months. Neurons remain functional, but features of neuronal aging are likewise stalled. We exploit this phenotypic plasticity to investigate how neuron aging can be stalled.