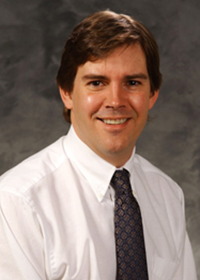 Glaucoma is one of the most prevalent blinding diseases worldwide and is characterized by the degeneration of the optic nerve and the apoptotic death of retinal ganglion cell somas in the retina. Ganglion cells are long projection neurons of the CNS and are directly responsible for collecting processed neurochemcial signaling from stratified neurons in the retina, in response to light, and directing those signals to appropriate visual centers in the brain. Loss of ganglion cell somata and axons eventually leads to irreversible blindness.

Regulation of ganglion cell death and the role of Bax.  In glaucoma, ganglion cells die using a classic intrinsic apoptotic program, which is highly controlled by members of the Bcl2 gene family. This was most effectively demonstrated by our studies using mice with homozygous for a mutant allele of the proapoptotic Baxgene. In these mice, cell death was completely abrogated in both acute and chronic models of ganglion cell loss. We also study Bax gene expression as a quantitative susceptibility allele, and have documented changes in the rate of ganglion cell death that correlate with modulations in the level of Bax gene expression. In the natural mouse population, we described a single nucleotide polymorphism in the Bax promoter that affects gene expression by 50%. Interaction of factors with this site is also modulated by genetic background, which presumably affects the capacity of the transcriptional machinery to regulate expression depending on which allele of Bax is present. Studies are underway to address the influence of genetic background on Bax expression using constructs that carry the polymorphism, and to identify the critical binding factors for this region.

Epigentic changes in apoptotic ganglion cells leading to gene silencing. Dying retinal ganglion cells undergo dramatic early molecular changes prior to committing to the apoptotic pathway. One of these changes is a global silencing of normal gene expression. Understanding the mechanism of gene silencing is important, since efforts to block the apoptotic program will be futile if there is no way to reactivate normal cell gene expression and function. Current studies in the laboratory have focused on alterations in the histone code, beginning with rapid deacetylation of core nucleosome histones. We are now investigating the sequence of epigenetic changes that follow the deacetylation step, including the methylation states of the core histones.

Identification of ganglion cell death susceptibility alleles. Glaucoma is considered a complex genetic disease in the human population, similar in etiology to Alzheimer’s Disease, ALS, and Parkinson’s Disease. The ability to identify genetic susceptibility alleles is not trivial, especially in cohorts of human patients, which require large numbers and detailed disease classification. We are using a reverse genetics approach involving large screens of inbred mice, to identify loci that affect various quantitative traits associated with glaucoma. In our first study, we identified a locus on chromosome 5 that dominantly affects ganglion cell death in response to an acute lesion of the optic nerve. Alleles identified using this approach are also being screened for linkage with the human disease in large collections of normal and affected patients.