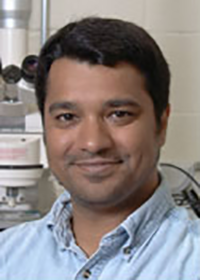 Information in the brain is encoded in the electrical activity of neurons that communicate with each other using chemical synapses. These synapses can be excitatory or inhibitory. Recent work from many laboratories has revealed that, rather than merely suppressing neuronal firing, inhibitory synapses are intimately involved in shaping the flow and timing of information in neural circuits. For example, most commonly used sedatives and anesthetics probably act by enhancing inhibitory function, whereas deficits in inhibition are associated with seizures.

Our research attempts to understand the mechanisms by which biophysical events at inhibitory synapses give rise to the computational roles that inhibition plays in neural circuitry. This topic requires study on several levels including the molecular function of GABAA receptors (i.e., the postsynaptic ion channels), the biophysical functions of the presynaptic terminal and postsynaptic membrane, and the connectivity and timing of signals across many excitatory and inhibitory neurons within a circuit. We use a combination of patch-clamp electrophysiology, rapid solution exchange methods and computer modeling to address these issues in brain slices and heterologous expression systems.

1. Study of the kinetics of GABA binding and GABAA receptor gating. This project uses submillisecond solution exchange methods to tease apart the kinetic mechanism of wild-type and mutant receptors in outside-out membrane patches from HEK293 cells. We are examining mutations that affect the stability of the bound GABA molecule within the GABA binding site. We are also studying a mutation found in human patients with a form of hereditary epilepsy that enhances receptor desensitization, and might thus contribute to a run-down of inhibitory transmission in affected individuals (see also #2 below).

2. Studies of inhibitory synaptic function in rat and mouse brain slices. By performing simultaneous recordings from anatomically identified inhibitory interneurons and their target cells, we are able to study pre- and postsynaptic function at the same time. This allows us to address which steps in communication between neurons are most critical under a variety of activity patterns. For example, we find that different classes of interneurons in dentate gyrus differ mainly in the dynamics of their firing and presynaptic properties, not in their postsynaptic response. This suggests that the context of network activity is a major feature in determining the influence of inhibition. We are also examining the altered synaptic function in transgenic knock-in mice that possess the heriditary epilepsy gene described above. This gene conferred seizure disorders on the mice, thus we have a unique opportunity to observe the way that specific biophysical properties of GABAA receptors propagate their influence up to the levels of synaptic and network function.

3. Studies of neural information encoding. We use dynamic current-clamp to mimic the synaptic conductances arising from hundreds of presynaptic inhibitory and excitatory neurons, in order to approximate the natural drive experienced by neurons in the brain. When complex synaptic conductance patterns are injected into neurons in the slice, they behave quite differently than when stmulated with the simple static patterns commonly used in electrophysiology experiments. Complex synaptic inputs evoke remarkably precise spike-timing, even in the presence of natural synaptic noise. We are using this approach to address how neurons translate their synaptic inputs into spike patterns, and to ask what features of the input are being encoded, and how the biophysics of the postsynaptic membrane determines this encoding. These studies combine experimentation, simulation and information-theoretic analysis.