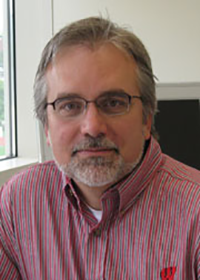 The focus of my laboratory is Molecular Neuropharmacology/Neurotoxicology. Oxidative stress is believed to be a principal factor in the development of many chronic neurodegenerative diseases such as Alzheimer’s, Parkinson’s, Huntington’s and Amyotrophic Lateral Sclerosis. In general, oxidative stress can be defined as an imbalance in which free radicals and their products exceed the capacity cellular antioxidant defense mechanisms. A gain in product formation or loss in protective mechanisms can disturb this equilibrium leading to programmed cell death (PCD). PCD occurs normally with the aging process but appears to be accelerated by the pathology of Alzheimer’s Disease, presumably due to increased oxidative stress caused by ß-amyloid. We know, therefore, the driving force for the development of Alzheimer’s Disease; however, we have little knowledge of how the different genes and proteins contributing to antioxidant defenses are regulated in brain. My laboratory’s goal is to discover ways to increase the defense mechanisms in brain by activating multiple antioxidant defense genes simultaneously. A process we refer to a programmed cell life (PCL). Any increase in the forces that drive PCD therefore must be balanced by increasing the forces driving PCL or the cell will die.

Present work in the laboratory is designed to determine: 1) Determine the molecular mechanism(s) by which tert-butyl hydroquinone (tBHQ) activates the ARE; 2) Characterize the expression pattern and regulation of the ARE in vivo and in primary neuronal and glial cultures derived from ARE transgenic reporter mice; 3) determine if ARE activation can block apoptosis induced by oxidative stress and beta-amyloid; 4) identify and understand the regulation of ARE-driven genes in mouse and human primary neuronal and glial cultures through the use of Affymetrix oligonucleotide microarrays; 5) characterize the role of Nrf2 in regulation of ARE activation and PCL in the brains of Nrf2 null mice; and 6) determine the effect of overexpression of amyloid precursor protein on antioxidant gene expression, neuronal survival and plaque formation in Nrf-2 null mice. In addition to the Alzheimer’s mice, we are presently studying transgenic animal models for Amyotrophic Lateral Sclerosis, Parkinson’s Disease and Huntington’s Disease.